Day 3 started by taking a short boat ride to the Bygdøy Peninsula. We actually thought it was an island until I just looked it up. Whoops! We walked around and were soon hungry,

so we stopped for waffles and coffee,

and apple cake and coffee;

the paparazzi followed us again, 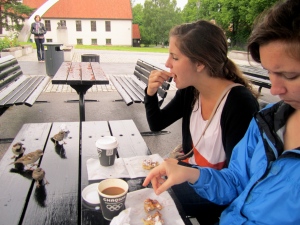 and these silly birds would not leave us alone while we were trying to eat!

The views on the peninsula were really pretty.

We accidentally snuck into a museum about Norwegian explorers, 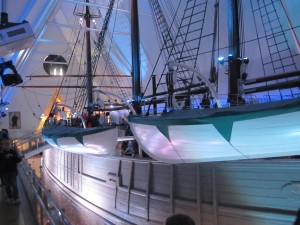 and being on the boat obviously reminded us of the Titanic,

and we really liked this polar bear. 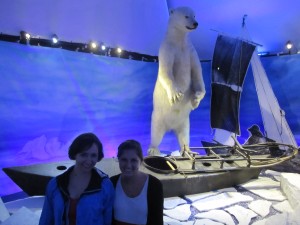 I’m still not sure what the connection between Norway and trolls is, but the gift shops were banking on the fact that other tourists knew.

We took the boat back to the mainland, and went to the National Gallery (free entry on Sundays!!),

and snuck a picture of “The Scream” by Edvard Munch. Do you see it? I had no idea this painting was in Oslo until we read it in a brochure at our hostel. 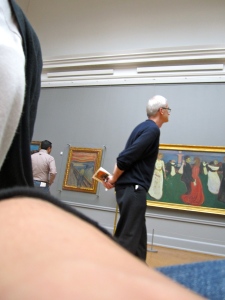 The dark clouds rolled in, but they didn’t bring the rain. 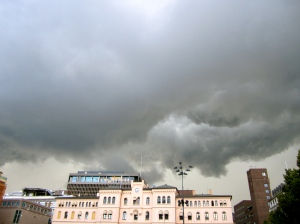 We ended our last day by watching Spain beat Italy in the EuroCup Final. We tried watching it a bar, but literally had no money left and every place was crowded, so we went back to our hostel and watched it in the packed lobby.

Monday morning we woke up super early, took the bus, caught our flight, and made it back to Dublin by mid-morning.

I would highly recommend Oslo as a travel destination. It’s beautiful, clean, safe the people are friendly, and there’s lots of things to see for free. After we booked the tickets and started researching, everything I read said how incredibly expensive Norway is. That’s true, but we bought groceries and ate several meals at the hostel, and tried to pick restaurants where you get a lot of food for your money (those are usually ethnic restaurants). We also never took the city bus, metro, or tram. Oslo is small enough to walk everywhere. If you’re smart with your money, even the most “expensive” destinations can be affordable.

P.S. Thanks to Carlos for (most of) the pictures.

This site uses Akismet to reduce spam. Learn how your comment data is processed.